The West Coast National Park is a favourite destination for many South African birders due to its reputation for attracting national rarities and easy access to the lagoon’s vast tidal mudflats. The resident specials are not to be forgotten and it is the favoured spot for birds such as the endemic Black Harrier and Southern Black Korhaan.

Birding from the car is extremely successful throughout the park. Entering the southern park entrance (-33.2438, 18.2044) you will be immediately in perfect habitat for most of the Strandveld specials. Look out for Yellow, and White-throated Canaries at the tops of bushes along with small groups of White-backed Mousebirds. Karoo Scrub-robins, Southern Double-collared Sunbirds, Cape Buntings, Cape Bulbuls and Cape Weavers are plentiful. Common Ostriches are reasonably common in the park and are often found blocking the roads! On the other side of the spectrum, the tiny Cape Penduline Tit needs to be carefully searched for. In spring they split up into breeding pairs, but in late summer they congregate into feeding groups of around 10 birds that move quickly through the vegetation. Bar-throated Apalises, Long-billed Crombecs and Chestnut-vented Tit-Babblers are common, yet secretive birds found throughout the scrubby vegetation. The duets of Bokmakieries can be heard throughout the park and it is always a delight to see a pair of this stunning species. Small coveys of Cape Spurfowl are commonly seen crossing the road and one needs to ensure that they are not the more secretive Grey-winged Francolin. One needs to constantly keep an eye out for the distinctive shape of a Black Harrier quartering low over the hills as they can be found throughout the park.

Heading up the Western side of the lagoon, you reach a turn off to the Abrahamskraal Bird hide. This hide overlooks an area of freshwater and is well worth a stop. A pair of African Rails as well as Black Crakes frequent the reed beds and can often be seen in the early morning. Cape Shovelors, Yellow-billed Ducks, Red-knobbed Coots, Common Moorhens and Little Grebes are all regular on the water, while African Spoonbills often rest on the rocks. Wetland species such as Little Rush and Lesser Swamp Warblers can also be found here with ease, along with skulkers such as African Swamphens. Birds such as canaries, waxbills, weavers, doves and sparrows are often seen drinking from shallow pools. This can be a great spot to find Black Harriers.

Heading further up the Western road, the Atlantic viewpoint offers another great spot to find some of the smaller birds such as Long-billed Crombec, Bar-throated Apalis and the friendly resident Karoo Scrub-robins. Rock Kestrels often perch above the picnic tables and can allow for close approaches. The Viewpoint looks over a valley behind the dunes which is a fantastic place to scan for Black Harriers. This road ends at the spectacular Tsaarsbank picnic site.

African Blank Oystercatchers are common on the rocky shore, with Cape, Crowned and White-breasted Cormorants perching on the rocky outcrops. This can be an excellent sea-watching site on a stormy day and one has a good chance of spotting Cape Gannets, White-chinned Petrels, Sooty Shearwaters and the occasional Giant Petrel out at sea. Just before the Tsaarsbank turn off is the entrance to the spectacular Postberg section of the park. This section is only open during August and September and holds one of the most spectacular displays of wildflowers in the area and is also a good area to search for Karoo Lark and Grey Tit. Along with a profusion of wildflowers, spring also brings a number of migrants to the strandveld including Namaqua Doves, Pearl-breasted and Barn Swallows and European Bee-eaters. Spring is also the perfect time to get good views of Cape Clapper Larks as they perform their aerial displays.

The main attraction of the park are the two excellent bird hides that extend onto the mudflats, giving birders a close up view of the thousands of waders that arrive in spring. Timing your visit to the hides is critical for success as the shallow lagoon results in large movements of the water’s edge between tides. The incoming tide after low tide is often the best as the water pushes the birds towards the hides. Tides can be searched for online. Waders usually start arriving in numbers in August and have hit their peak by October. The large majority of birds are made up of Curlew Sandpipers and Little Stints, with Sanderlings often joining in numbers. In between these small birds, larger birds such as Marsh Sandpipers, Common Greenshanks, Ruff, Ruddy Turnstone, Common Whimbrel and Bar-tailed Godwits are usually present. Common RInged, Kittlitz’s, White-fronted and Chestnut-banded Plovers can be seen on the flats, although the latter is only occasionally present. The larger Grey Plover stands out among the flocks of waders, as do Eurasian Curlew, with their exceptionally long beaks. Red Knots, Terek Sandpipers, Pectoral Sandpipers and Lesser Sand Plovers are rarities that usually turn up every year, with the possibility of mega birds such as Lesser Yellowlegs, Broad-billed Sandpiper, Hudsonian Godwit and many more always keep you searching through the flats. In addition to the waders, the hides are a good place to scan for Western Osprey in the Summer months as well as the occasional African Fish Eagle and African Marsh Harrier. Terns are well represented with Caspian, Swift (Great Crested) and Sandwich usually present. Large numbers of Greater and Lesser Flamingos are often present along with Pied Avocets, Black-winged Stilts, South African Shelduck, and Grey Herons.

The road leading up to the Geelbek manor house is lined with trees, providing a perfect habitat for both Cardinal Woodpecker and Acacia Pied Barbet. It is also worth searching for the Lesser and sometimes Greater Honeyguides that are often seen along this road or in the trees behind the manor house. African Hoopoes can also be found in the fields behind the restaurant.

The road up the Eastern side of the Lagoon offers further birding opportunities, particularly at the Seeberg Birdhide and Seeberg Lookout Point. The road to the lookout point climbs up a granite hill with areas of open vegetation that is favoured by Southern Black Korhaans. The harsh call of these birds can be heard all around the viewpoint in the early morning and late afternoon. The viewpoint is also a good spot to scan for Black Harriers, and raptors such as Rock Kestrels and Black-winged Kites. The Seeberg birdhide (the turnoff is just past the lookout road) is a great place to get a close view of some waders including the resident White-fronted Plovers. Caspian Terns and Bar-tailed Godwits are often present in the season as well as large numbers of both Greater and Lesser Flamingos.

The short boardwalk leading to the hide is a great spot for Cape Penduline Tits along with the other species of the veld. While driving through the park, it is worth scanning the skies for raptors, especially in the summer months when they are usually filled with Yellow-billed Kites and the occasional Booted Eagle. You could also be treated to sightings of Martial Eagle, Pale-chanting Goshawk and even a view of the breeding pair of Verreaux’s Eagles that nest in the quarry not far north of the park.

The West Coast National Park (WCNP) is one of the premier birding destinations in the Western Cape. It is home to one of the largest habitats for migratory wading birds on the continent as well as a number of rare resident endemics including the endangered Black Harrier. The lagoon is famous for attracting rarities and local birders flock to the park in spring and summer to see what season will turn up. The extensive areas of pristine Strandveld are excellent for semi-arid specials.

Access and facilities:
West Coast National Park has two entrance gates, a southern gate off the R27 -33.2437, 18.2044. And a northern gate via the town of Langebaan -33.1176, 18.055.
Gate Times are from 7am to 7pm.
Admission for South African Residents is R66 for adults and R33 for children. During the flower season, from August to September, the tariffs increase to R94 for adults and R47 per child.
Wild Cards are applicable here.
As most birding is done from the car, this is an ideal spot for disabled access. The famous bird hides on the lagoon are also wheelchair accessible via boardwalks. 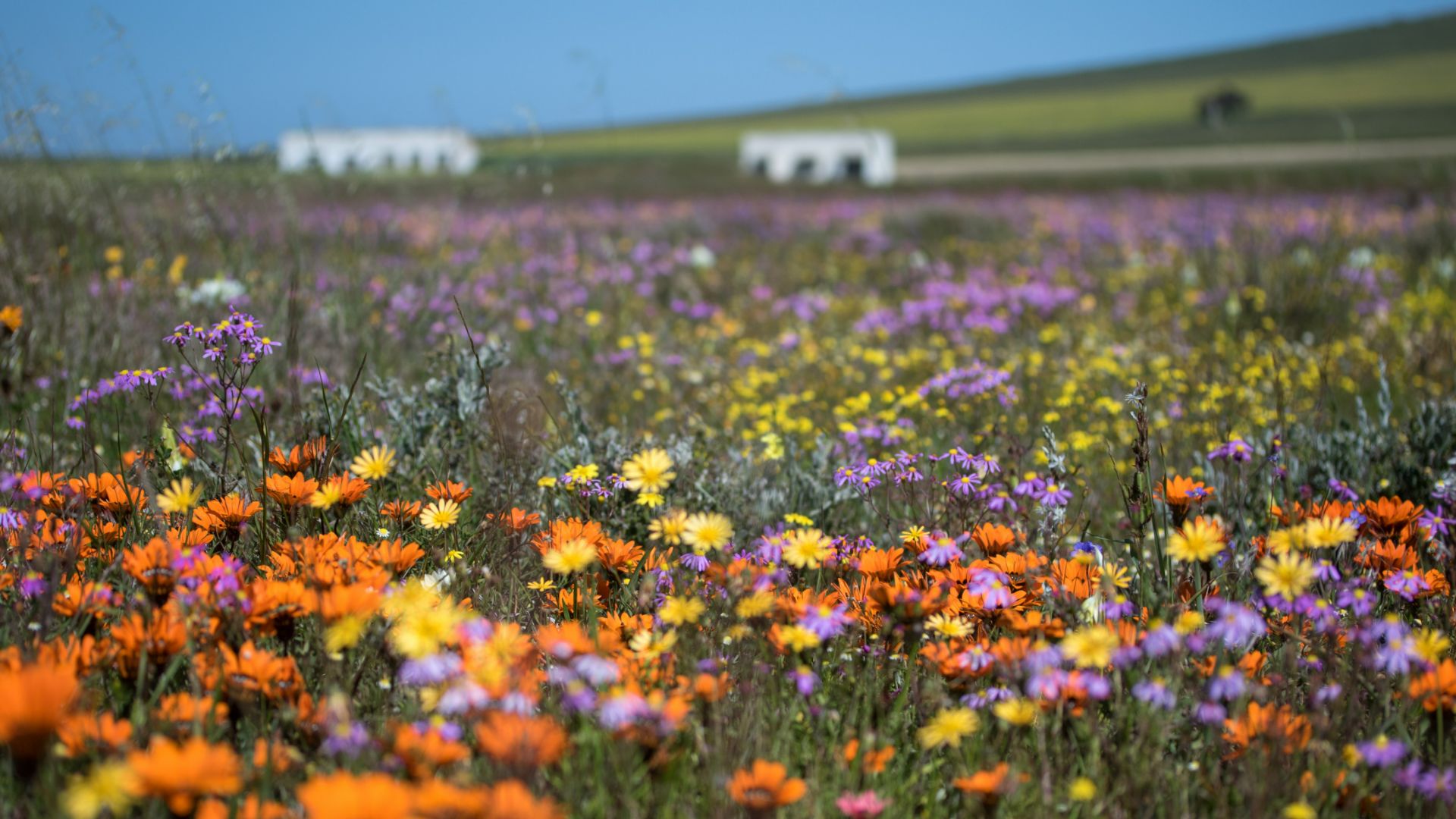 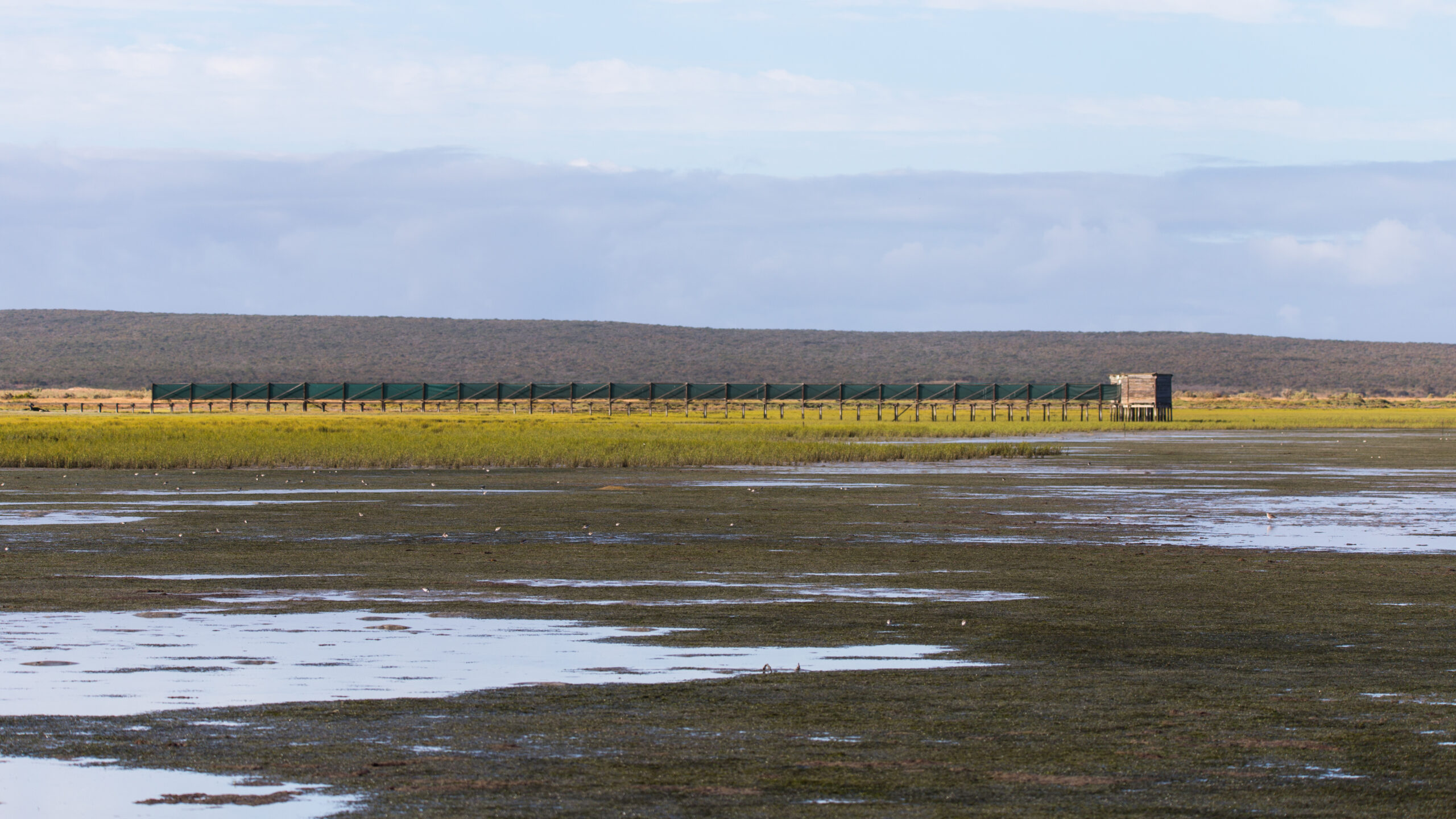 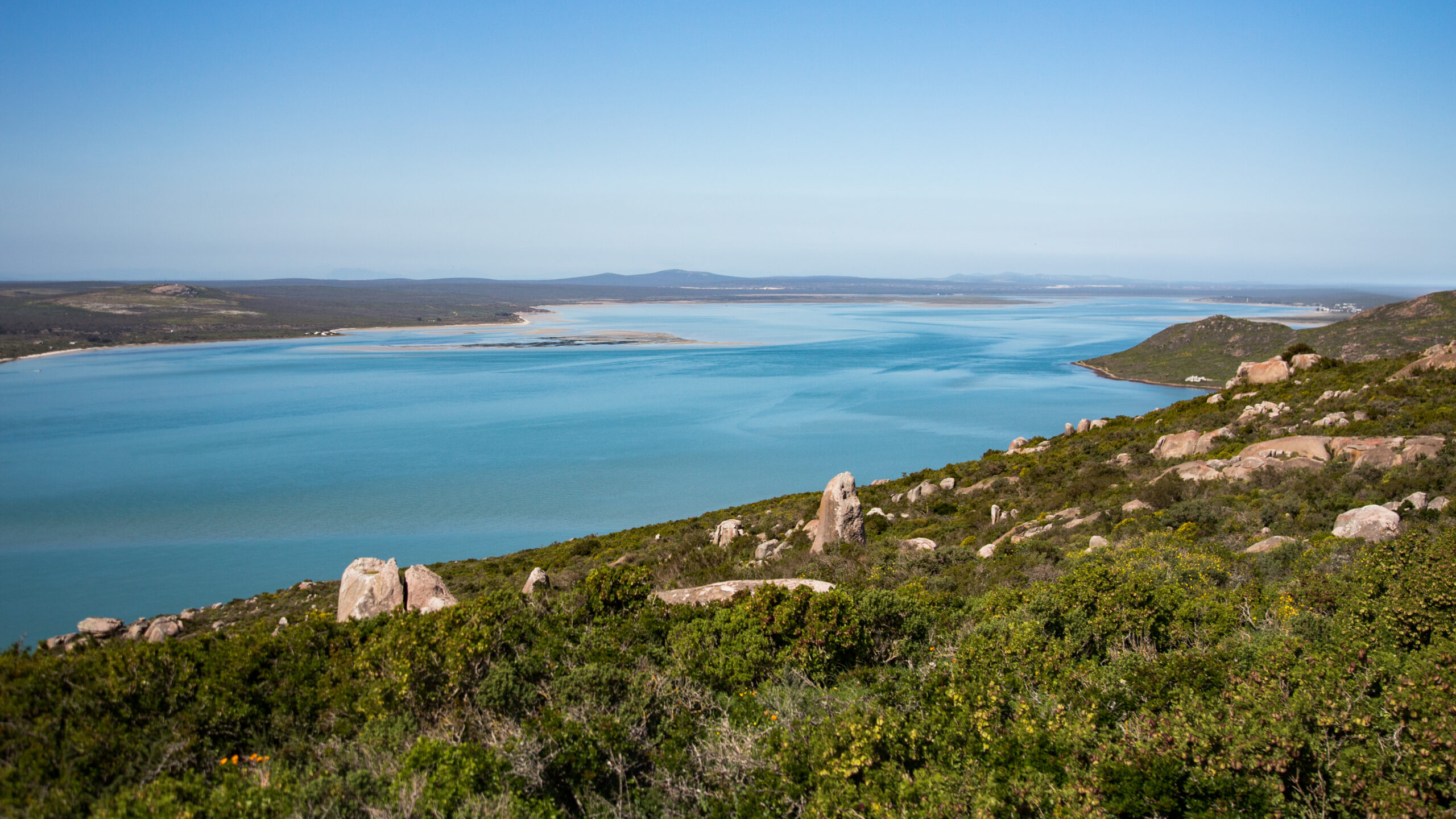 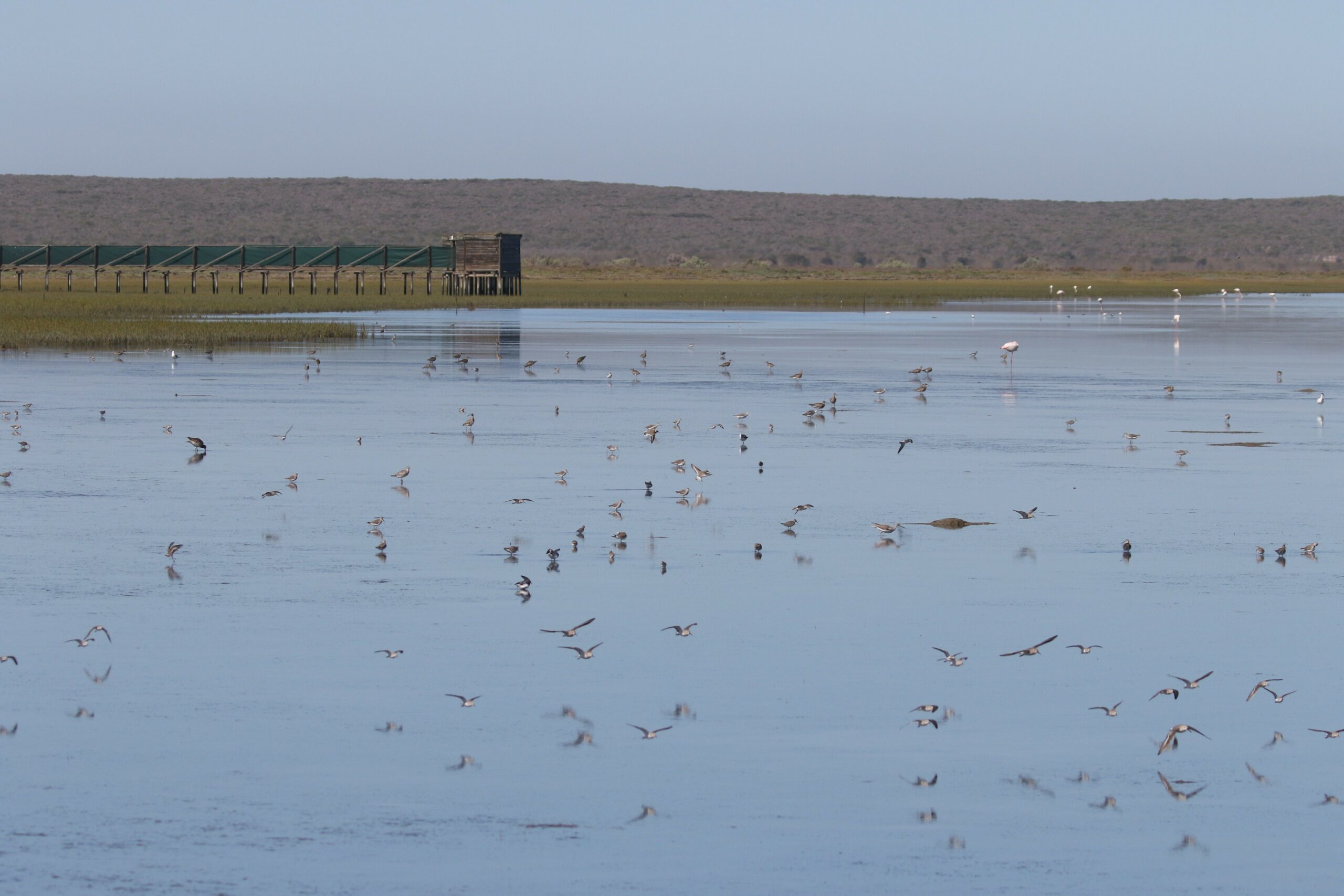