Unique to Southern Africa, and totally exclusive to Eshowe, is the Dlinza Forest Aerial Boardwalk extending over 125m through the forest canopy and leading to a canopy observation tower which emerges above the forest and overlooks a vast area of Dlinza. The forest itself covers roughly 250 hectares and, due to its accessibility and impressive bird list, is one of southern Africa’s premier forest destinations. An average visit should produce 50 species including many range-restricted specials.

The two species for which the Dlinza forest is best known are the Spotted Ground Thrush and the Eastern Bronze-naped Pigeon. At 20m high, the viewing platforms provide an ideal vantage to watch for Eastern Bronze-naped Pigeons flying above the forest canopy between their roosting and feeding sites. The species is easiest to see in the early mornings and late afternoons but can be located during the day by listening for the haunting calls given from the forest canopy. From the same vantage, it is usually also possible to see an interesting diversity of forest canopy species including the Narina Trogon, Grey Cuckooshrike, Purple-crested Turaco, Trumpeter and Crowned Hornbills, African Green and African Olive Pigeons, and an array of cuckoos in the summer months. African Goshawk and Crowned Eagle are also regularly sighted soaring above the forest canopy.

The two self-guided trails – named the Impunzi and Unkonka Trails – through the forest are the best chance at finding the Spotted Ground Thrush as this species prefers to remain on the forest floor. This species tends to prefer deep gullies and can be located by following the sound of rusting leaf-litter and by listening for the high-pitched contact calls. It occurs alongside the Olive Thrush, but is readily found within the forest interior or at the nearby Bishop’s Seat. Other species to look for in the forest interior include the White-starred Robin, Chorister Robin-chat, Brown Scrub-robin, Yellow-throated Woodland Warbler, Tambourine and Lemon Doves, Olive Woodpecker, Green Malkoha, Scaly-throated Honeyguide, Collared Sunbird, Cape Batis, Bar-throated Apalis, Olive Bush-shrike, and Terrestrial Brownbul. Dense thickets support the shy and reclusive Buff-spotted Flufftail and the haunting calls given by this species are regularly heard on misty mornings in the summer months. Visit the bird hide near the entrance to the forest, where the Red-backed Mannikin and Green Twinspot are fed daily. To maximise your chances of seeing these species, enquire at reception as to whether seed has been given. Alternatively, leave seed in front of the hide prior to your walk into the forest and, by the time you return, the birds should begin visiting the hide intermittently.

Southern Zululand is perhaps the premier forest birding route in all of KwaZulu-Natal, home to a rich diversity of species in a mix of different habitats. Starting on the warm coast of Zululand, between Mtunzini and Richard’s Bay, the route offers many estuarine swamp forests supporting impressive numbers of threatened species including the Mangrove Kingfisher and Black-throated Wattle-eye. Coastal forests here are equally rich in species and are perhaps the best areas anywhere in South Africa to search for the Spotted Ground Thrush (mainly a winter visitor) and Palm-nut Vulture.

Further inland near the towns of Eshowe, Melmoth, and Nkandla are several Afromontane mistbelt and scarp forests where a number of incredibly range-restricted species may be found including the highly localized endemic race of the Green Barbet, as well as Eastern Bronze-naped Pigeon. These areas descend sharply down to dry thornveld habitats in a region that is rich in both Zulu history and culture.

The town of Eshowe is centrally positioned within the southern Zululand birding route and is surrounded by extensive scarp forests. It is often the starting point for birders visiting this region of KwaZulu-Natal and is rightly famous as the best site anywhere in South Africa for both the Spotted Ground Thrush and the Eastern Bronze-naped Pigeon. Dlinza Forest, which is situated in the very heart of the town itself, is perhaps the pride of the entire southern Zululand birding route and boasts one of the only canopy towers – offering sublime views over the forest – anywhere in South Africa. To the west of Eshowe is the Entumeni Nature Reserve, which is superficially similar in many regards to the Dlinza Forest. To the north of the town is Lake Phobane, which is at the very heart of King Shaka’s Kingdom offering unique birding in a variety of different habitats.

Directions:
To reach Eshowe, take the N2 north from Durban. From there, take the R66 towards Gingindlovu and Eshowe for 28km. This road leads directly to the town of Eshowe. Once there, take the second exit into Eshowe near the top of the hill and turn left into Kangella Street. Continue for 2.8Km to reach the Dlinza Forest sign on your left.

Access and facilities:
Two well-marked trails provide access to vast areas of the Dlinza Forest, in addition to the boardwalk and canopy viewing platform. A bird hide, small museum highlighting local biodiversity, picnic site including braai amenities, and toilet facilities are available at the main entrance to the Dlinza Forest off Kangella Street. Note that a small fee is payable and birders’ are advised to check the opening times prior to their visit.

Dlinza Forest is under the administration of Ezemvelo KZN Wildlife. For more information, contact: 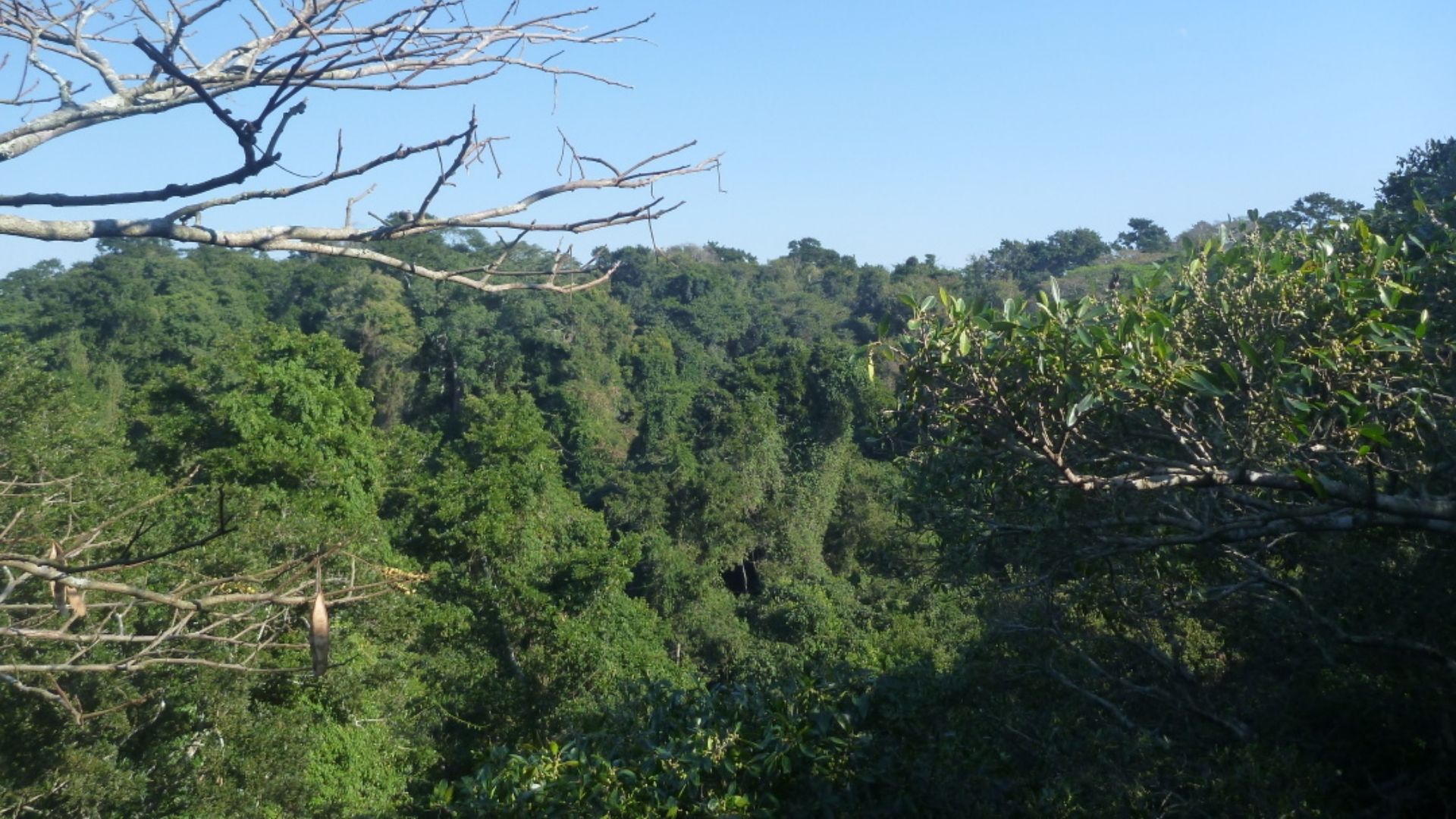