The beautiful Naude’s Nek Pass is one of the easiest places in South Africa to locate the full compliment of Drakensburg specials. Accessible from the villages of Rhodes and Maclear, the pass itself reaches a summit of 2920m a.s.l. at the southern limit of the Drakensburg range bordering with Lesotho. The views from the top of the pass are sensational, making the effort to get there well worth the trouble.

However, this off-the-beaten track is accessible only in a 4×4 as the road presents something of a challenge – especially in winter when heavy snowfalls are common. Overnight visits are recommended as the pass takes several hours to complete from top to bottom.

The Bearded and Cape Vultures are regularly sighted soaring over the pass itself and both species attend a vulture feeding station near the Tenahead Lodge. Drakensburg Rockjumper is conspicuous near the top of the pass and around the hotel, regularly feeding in road cuttings and on scree slopes. Listen for the high-pitched calls of the Rockjumpers, which assists in locating small family groups of these delightful birds. Ground Woodpecker is widespread in rocky habitats, especially near stone kraals where the birds frequently breed. Drakensberg Siskin is common in the dwarfed shrubland and large flocks are usually present along the small stream below the Tenahead Lodge. Mountain Pipit are present in the summer months – separated from the similar looking African Pipit by the darker overall features and the different display call. Debate exists as to where these nondescript birds go in the winter months, though the current suggestion is that they are altitudinal migrants into the surrounding foothills. Lush grasslands on the lower stretches of the pass support fair numbers of Denham’s Bustard and Yellow-breasted Pipit. Other notable species include the Mountain Wheatear, Buff-streaked, Sickle-winged and Familiar Chats, Wailing Cisticola and African Stonechat.

Explore thickets along small streams between the village of Rhodes and the Naude’s Nek pass for Barratt’s Warbler, Layard’s Warbler, Drakensburg Prinia, Bush Blackcap and Fairly Flycatcher. Yellow Canary, Cape Robin-chat, Cape Bunting, and Olive Thrush are usually also present. Grasslands around the village of Rhodes and near Maclear support fair numbers of Grey Crowned Crane, small numbers of breeding Wattled Crane, Black Harrier and Southern Bald Ibis. Stands of trees, such as in the town of Rhodes itself, support nesting Rufous-chested and Black Sparrohawks.

The dramatic Drakensburg Mountain range consists of a continuous, abrupt and rugged scarp or mountain wall along the national boundary between South Africa and Lesotho. Lesotho’s Thaba Ntlenyana (3 484 m a.s.l.), the highest peak in Africa south of Kilimanjaro, lies along this scarp. There are a number of other outstanding topographical features in this formidable barrier of cliffs and peaks, including, from north to south, the Amphitheatre, a semi-circle of high cliffs with a sheer drop of 613 m; Mont-aux-Sources (3 282 m a.s.l.), Cathedral Peak (3 004 m a.s.l.), Cathkin Peak, …

The cliffs forming the escarpment are capped by extensive, horizontally bedded basalt lava slabs that create a high-altitude plateau lying between 1 830 and 2 440 m a.s.l. The basalt is deeply incised by the tributaries of the several major rivers that flow through the Eastern Cape and KwaZulu-Natal into the Indian Ocean. These river catchments hold many sheer cliffs, with near-vertical walls more than 500 m high. At lower altitudes, these steep basalt cliffs give way to slopes that form a large grassy terrace of variable width, interspersed with bands of exposed basalt. Lower still, the grassy terrace falls away as cave sandstone cliffs are dissected by rivers and streams to form valleys, gorges and inselbergs. As a whole – the region is dominated by ferriferous soils, which are characteristic of well-drained uplands with high rainfall and relatively low temperatures. Leaching has been severe and fertility is therefore low. Temperatures are extreme and, on the high-altitude slopes, can drop below -15 °C, although the maximum annual average reaches 15–35 °C, depending on altitude. Annual average rainfall is 800 mm, falling mostly in summer (October–April).

The altitudinal zonation of vegetation is characteristic of most mountains of sufficient height. In the Drakensberg, three primary altitudinal zones occur: the montane zone (1 280–1 830 m a.s.l.), the sub-alpine zone (1 830–2 865 m a.s.l.) and the alpine zone (2 865–3 500 m a.s.l.). The montane belt extends from the lowermost basalt cliffs to the valley floors. Grasslands dominate, while protea parkland is found on most spurs and crests. The vegetation of the alpine belt consists of climax heath interspersed with alpine grassland genera. Woody communities flourish in rocky enclaves. Associated karroid shrubs occur in overgrazed areas and in fire-protected gullies. The summits are generally rocky with bare patches of shallow soil and rock sheets near the escarpment. On the lower slopes, scrub develops on the rock and cliffs, including small trees and shrubs. Several woody communities are confined to the sheltered gorges and kloofs in the sub-Alpine zone. The climax community of the montane belt is tall evergreen forest, which occurs on mesic streambanks and in deep kloofs where fire is excluded.

In terms of avian diversity – some 200 species occur throughout the Drakensburg Mountain range, roughly 40 of which are endemic to South Africa and neighbouring Lesotho. Though the neighbouring province of KwaZulu-Natal is perhaps better known as a birding hotspot, all key regional endemics can be found along the Southern Drakensburg route through the Eastern Cape. Top among the list of most-desirable species are the Mountain Pipit, Drakensburg Rockjumper, Bearded and Cape Vultures, and Drakensburg Siskin. Other notable mentions include the critically endangered Rudd’s Lark, Bush Blackcap, Short-tailed and Yellow-breasted Pipits, and Striped Flufftail.

Visitors should be prepared for all weather conditions at the top of the pass and should be especially aware of heavy winds, snow and dense mist.

Recommended accommodation nearby:
The nearest Birder Friendly Establishment is the 3-star rated Walkerbouts Inn, situated within the highland town of Rhodes. Situated on an elevated position on the western side of town, this quaint retreat offers sublime views of Rhodes and the southern peaks of the Drakensburg. Some 230 species have been seen in the surrounding areas including the Drakensburg Rockjumper, Beaded Vulture and Mountain Pipit.

Local guide information:
No Birder Friendly Tour Operators or local guides are currently available for the wider Matatiele area, though farmers are well-informed about the local birdlife and can provide assistance where necessary. 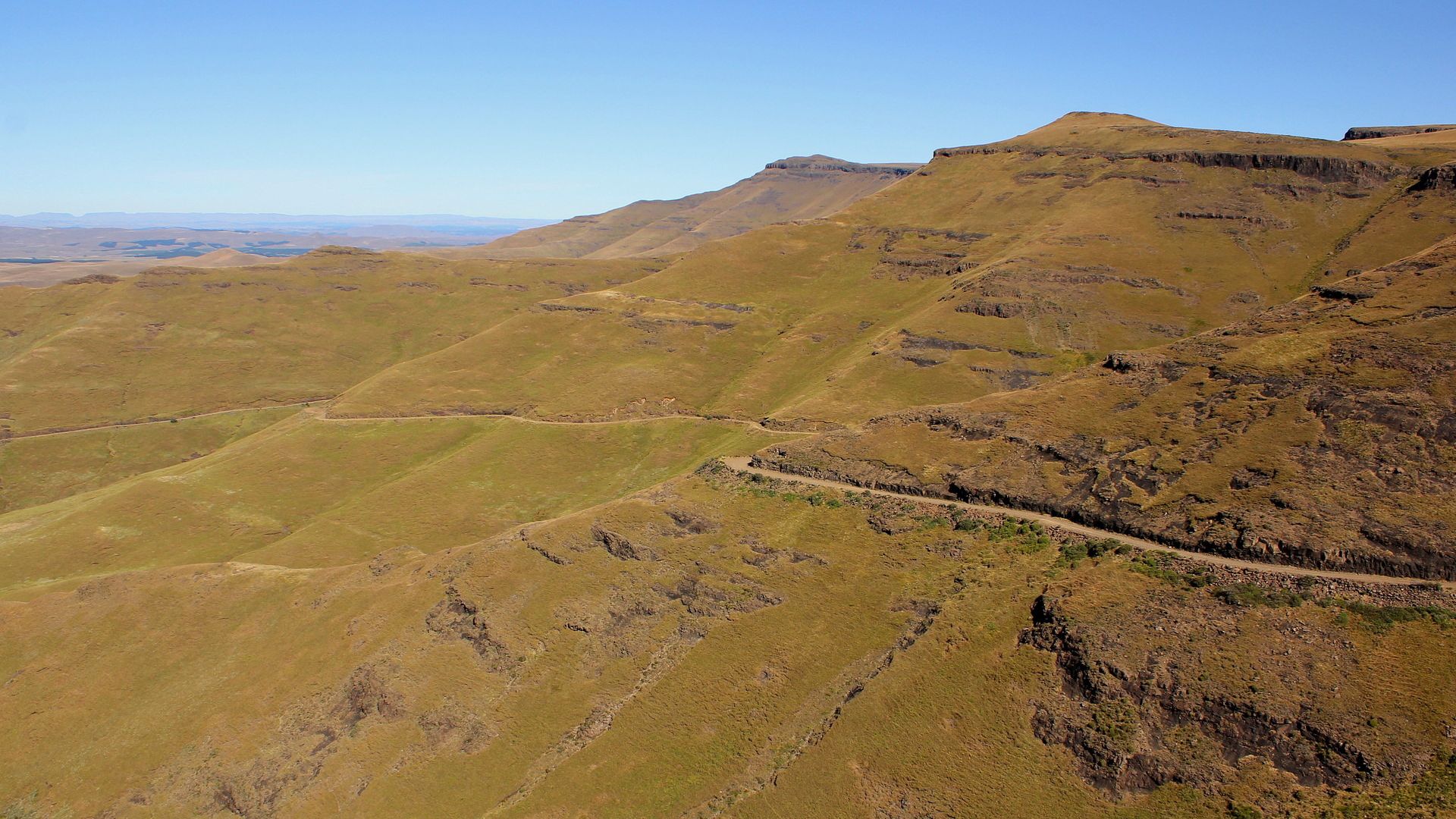